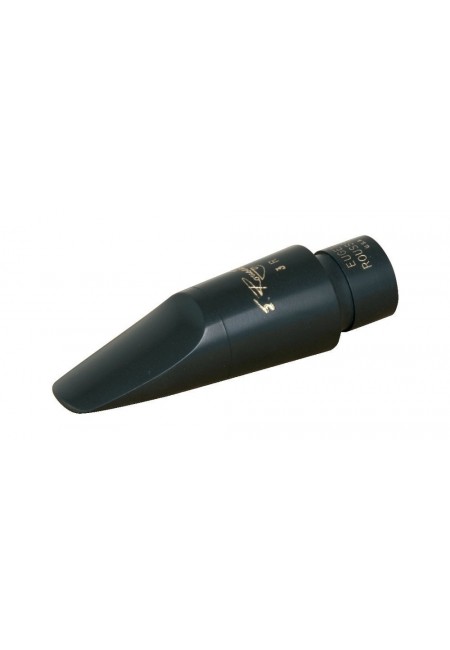 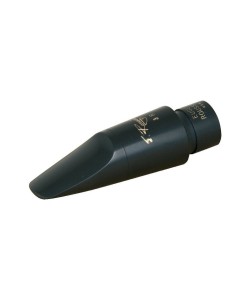 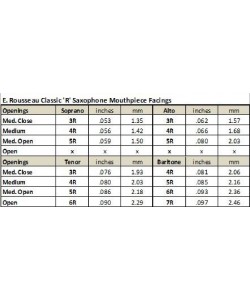 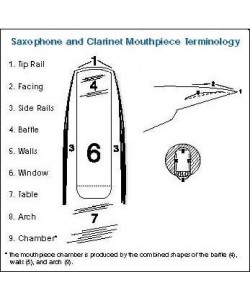 An Interview with Eugene RousseauQ. How did the E. Rousseau Mouthpiece project originate?While studying in Paris with Marcel Mule during 1960-61, I also had the privilege of studying with the eminent acoustician, Charles Houvenaghel. Monsieur Houvenaghel really opened my eyes to the world of wind acoustics, and I thus became extremely interested in the design and construction of saxophones and saxophone mouthpieces.Shortly after joining the Indiana University faculty in 1964, I became acquainted with the eminent clarinetist, Bernard Portnoy. After Mr. Portnoy became a member of the IU faculty, his encouragement led me to develop the first E. Rousseau Mouthpiece, the alto 4R mode in 1972. Additional facings for the R Series naturally grew from that important first work.Q. Has every E. Rousseau Mouthpiece been designed by you, personally?Absolutely! And the process for each and every model has been one of many hours of playing the prototypes. Following this arduous phase of testing, I continued with the critical test by playing them in performance situations. Q. What is the manufacturing process of your classic mouthpieces?As with all E. Rousseau Classic models, the R Series mouthpieces are made from finest quality hard rubber. In the manufacturing process for those made of rubber, a stainless steel core is used for each model. The core is simply a kind of mandrel in the exact shape of the mouthpiece's interior dimensions. It is placed in a mold and surrounded with rubber. After being vulcanized and hardened t the exact shape of the core mandrel, the mouthpiece is finished and faced to exacting specification. The facing consists of two identical curves of the side rails (see diagram below). Each mouthpiece is then is inspected again to be sure it meets the all specifications and performance standards.Q. What factors of the mouthpiece design influence tone quality?The areas critical to influencing tone quality are the opening and length of the facing, balanced side rails, a chamber of appropriate size, and a well-designed baffle. There needs to be a good balance in these design features so that the tone quality is desirable, yet allows the player to have flexibility and control in all registers, and at all dynamic levels. In my years of field-testing mouthpieces, these features have been - and still are, the guidelines for all E. Rousseau Saxophone Mouthpieces.Q. What is the baffle on a woodwind mouthpiece? How does it affect the player’s performance?In contrast to very early mouthpiece designs, virtually all models today have a slightly raised surface directly below the tip end of the reed. This area is known as the baffle, and its height and shape have much to do with the tone quality that a player produces.  Classic models typically have a baffle that is less pronounced than those mouthpiece designed for jazz. In all cases, the point at which the air enters the mouthpiece affects the harmonic structure of the air column, and thus the tone.  Generally speaking, a less pronounced baffle will result in a moderating of the higher partials, producing a tone that is warmer and more typical of a true classic saxophone sound. But the baffle alone does not control the harmonic make-up, as the air entering the saxophone is to some extent governed by the chamber design.. With respect to the baffle and general design, my main concern has always been to find what I believe to be the best balance among: tone quality, response, projection, and dynamic control.Q. How do you determine which mouthpiece to use in classical performance?The way the performer uses his/her air is critical. Given a good tonal concept, the mouthpiece serves in allowing the player to better achieve this goal. .  Q. The E. Rousseau 4R is extremely popular, as are the NC-New Classic and RC models; what is the difference among these three series? The basic shape of the chamber is basically the same, but there are important differences in the size of the chamber and the contour of the baffle. Q. What are the critical factors in selecting a mouthpiece?In testing a mouthpiece, I recommend consideration of six factors: (1) Use several reeds of slightly different strengths. Your favorite reed may be fine for your current mouthpiece, but not for a different one. (2) Be certain that the reed is placed correctly on the mouthpiece, that its tip is even with the tip of the mouthpiece, and that it is centered from side to side. (3) Be certain that the reed is sealing. To test this, keep the end of the mouthpiece covered with one hand, draw the air out of the mouthpiece (keeping the end covered), then take the mouthpiece from your mouth. A popping sound ensures that the reed is sealing. (4) Before playing anything, use a tuning note so that the mouthpiece can be at the correct position on the bocal (neck). If not, distortion can occur. 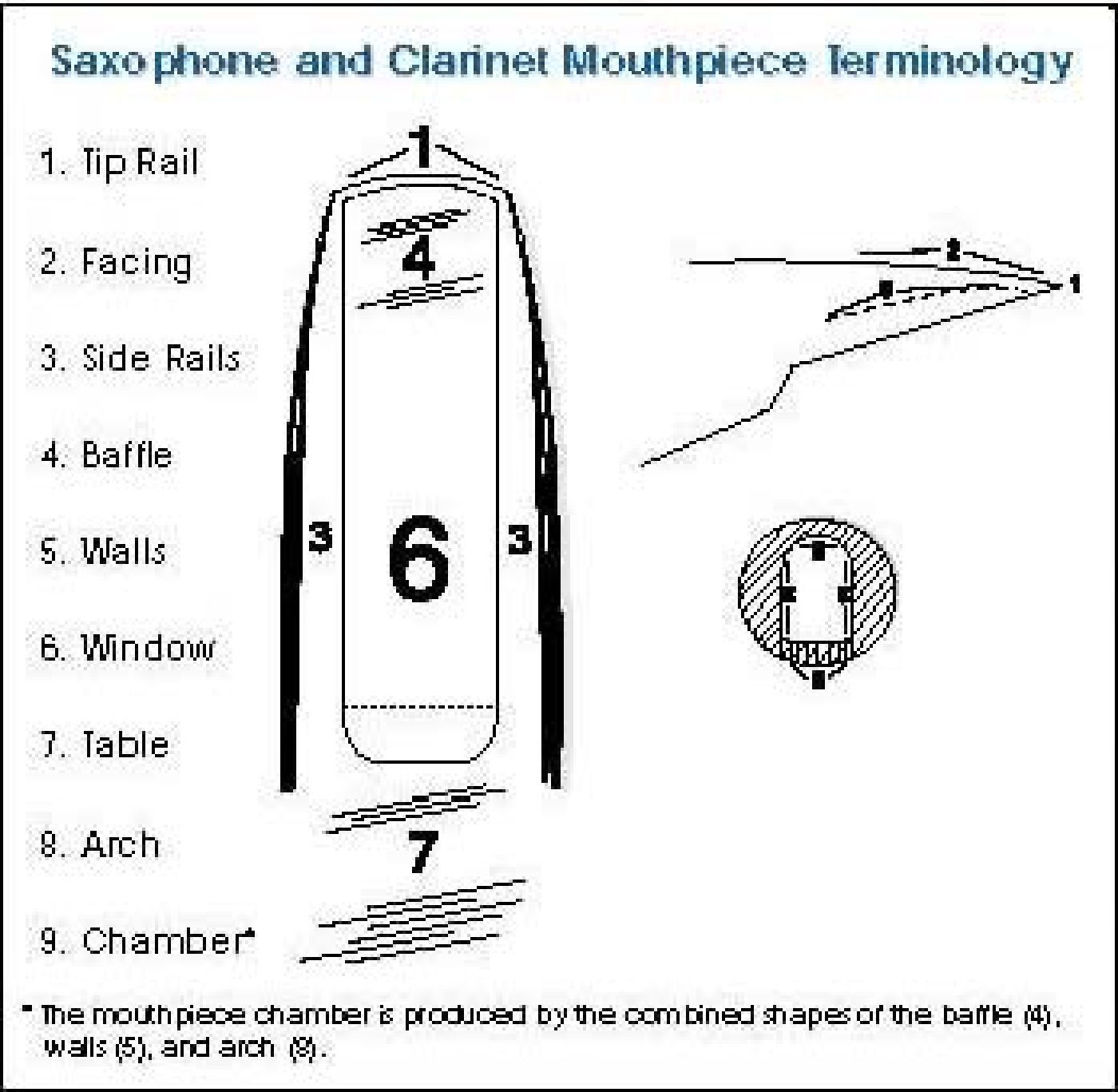 The tip rail contributes to the brightness or darkness of tone; a thinner, narrower tip allows for higher partials – thus more brightness. The facing is actually comprised of two curves – the two side rails– one on each side of the mouthpiece, so it is important that these are symmetrical. Each brand of mouthpiece has a number or letter that designates the facing, referring primarily to the tip opening, i.e., the distance between the reed and mouthpiece at the very tip. A larger number indicates a greater opening, but the designations do not usually indicate the length of the facing. The baffle is the area inside the mouthpiece that is directly underneath the reed. The distance from the reed to the baffle is critical in determining brightness and darkness of tone. Generally, a higher baffle, i.e., closer to the reed, produces a brighter tone. The walls normally come straight down from the top of the side rails to the baffle. Early examples of the saxophone mouthpiece were often concave, while some jazz mouthpieces (E.Rousseau Jazz Metal, for example) have the walls descending diagonally from the side rails. The window is the opening between the side rails that is covered by the reed. The reed rests on the table to provide a good seal between reed and mouthpiece; the table must be kept clean and smooth. E. Rousseau hard rubber mouthpieces are designed to have a very slight concave area in the center of the table to ensure a secure fit for the reed. The arch is located within the table at the end of the window, and can be easily seen by looking through the mouthpiece from round end to tip. The chamber is a combination of the shapes of the baffle, walls, and arch.